This was the session I changed from my original purchases.  Mainly because having been moved by Clare Sultmann’s story on Wednesday I felt this story of recovery over adversity would be of more interest to me than the three young poets. I’ve nothing against poetry or youth, it was my choice from gut feelings that I go for this session, and I’m so glad I did.

10.15am to 11am Venue – Spartans Indoor Baseball Courts (due to school renovations)

From the lows of a devastating injury to the highs of representing Australia as an athlete, and inspiring an upcoming Hollywood movie, Sam’s path has been anything but ordinary. In 2013, Sam’s dream life turned into a nightmare. On a 2013 family holiday in Thailand, Sam leant against a rotten balcony railing, falling through it and crashing six metres onto the concrete below. She suffered devastating injuries that left her paralysed from the chest down. Broken and hopeless, Sam reached her outer limits of suffering. But with courage, determination and a little help from an unlikely feathered friend, she made her way back from the edge, scarred but undefeated.

Samantha was introduced with her husband Cameron. They would relate how in 2013

Sam suffered devastating injuries, and how, a little magpie they named Penguin, would save the family.

Sam began. From a young age, she had a sense of adventure. Her mind was set on two things, travel the world and to become a nurse. She worked in a cake shop. She met photographer Cam, as they were kindred spirits, they set off to travel the world for two years. The more remote and exotic the better. They met Catherine, an Australian doctor in Ethiopia. They were inspired. They wanted to go back once their boys Ruben, Noah and Ollie were old enough to travel to Africa. There was too much unrest in Cairo so they went to Thailand and that’s where they went to a beautiful hotel.

They stood on the beach after a swim. Sam felt life was perfect. They stood on a balcony to enjoy the views, she leant against the safety rail and it gave way. She fell six meters to the concrete pathway. There was a pool of blood from the back of her head. The three boys saw it.

The journey changed, she was taken to a hospital close by. Her whole body was battered, her back was broken. She would never walk again. She was taken to Royal North Shore Hospital in Sydney where she spent seven months in hospital. They were all looking forward to Sam coming home.

Once home Sam found it much harder. It didn’t feel like her own home or be a good

mum. They represented the world she’d lost. She wasn’t the same anymore and she missed the old Sam. She thought about suicide.

Then they found an injured magpie. They decided to give it the best shot. They called it Penguin and this bird was something that made them all happy. Penguin gave her a purpose. Sam laughed for the first time since the accident. Penguin was her constant companion. Never kept in a cage, we were her family. She found it hard to leave the lounge. Penguin would sit in the Frangipani tree.

Every morning at 6 am she came in. The boys had adopted a baby sister. A small creature that made a big difference. When we went out, Penguin was always excited to see them return. At 3.30 they called each other in bird calls, the boys mimicked the bird calls. 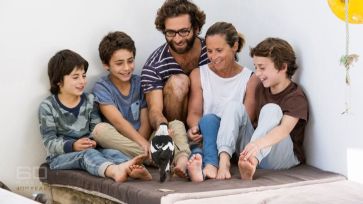 Sam said watching Penguin get stronger every day made her feel she wasn’t useless. She could still add value and purpose to those around her.

Penguin had spent more time outside, sometimes going away. On Ruben’s thirteenth birthday, they said ‘imagine if Penguin came back today’. People around them knew Penguin. She did arrive at a nearby property but wouldn’t go to their friends, Cameron had to go and pick her up. When Ruben returned home and Penguin was there he rushed inside calling to her in bird song. Cameron took a video. Sam said simply – he was very excited.

Sam couldn’t do any of the sports she loved but she could kyack. So she took up racing 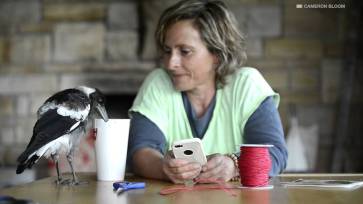 and started training six times a week, going to the gym three times a week. She had a goal to compete in Kyacking in the Para Olympics. Travelling again was wonderful. Winning races and medals were not as important as being active.

Before the accident, her favourite place in the world was Palm Beach, Sydney on the point. She thought she could never go back there. Her first Christmas at home she was woken at 4.30 am and four friends were waiting for her. They carried her to her rock. Ruben sprinkled rose petals there. It was her Christmas present to be on her rock. One by one her friends left her. They allowed her twenty minutes to sit on her rock alone.

Now she knew anything is possible if your creative and determined.

She’ll never accept being in a wheelchair for life. Surfing had been her passion before the accident, now laying down she started surfing again. She entered the Australian Adaptive competition and won. Then went onto the World Adaptive surf challenge. She can duck dive and Cam pushes her onto the waves. She made it through to become World Champion. At that moment, she was taller than everyone else, for once.

Sam said now she’s super grateful. You’re never too old or damaged to do what you love doing. Anything and everything can be taken away at any time. Strive to be the best you can be with those you love most. Accepting the love of others can help make you whole.

Penguin at two years old was ready to find a mate. Male Magpies are white and black on the neck but females are grey.

When the boys were at kindy they would take the kids sandwiches at morning tea and Penguin would fly down there.

Cam said it was an incredible story, Sam is goal orientated, and her World Championship participation showed how much she’d changed.

Q. How do you feel you’ve changed in yourself, what affirming things?

A. Sam – I’ve completely changed, I’m happy and content. I still don’t like my body. I’m resilient. I have amazing support and from Cam and the boys. I’ve not spoken publically before so this is new for me.

A. Cam – I made an Instagram account for Penguin. When the press picked it up and the book happened. Bradley, the author of the book, which was a wonderful process.

Q. How much involvement will you have in the movie?

A. Cam/Sam – we are executive directors, it’s being filmed in our house, all Australian production. We have to move out of our house while they make the movie.

Q. As an athlete how do you stay motivated?

A. I’ve always been competitive. I found Kyacking, not enough speed. I’d grown up surfing and that was when the fun feeling returned. The picture of me kyack training showed the strain. Surfing is better.

Q. Would you have found the unconditional love the same if it had been a dog?

A. Sam – a dog might be similar. Cam – I don’t agree, Penguin was wild, not a pet. The powerful thing was that she could have left at any time.

Q. How are they going to do a Magpie in the movie?

A. They have a bird wrangler.

I am an author of SciFi Books 'Dual Visions' and it's follow up 'Vashla's world' now retitled Book 1 and Book 2 of the Ancient Alien Series, as I've written the third in the series currently titled Travellers. I also write book reviews, articles and short stories. As a member of The Ten Penners, I've written six short stories in a collaborative our anthology for children called Fan-tas-tic-al Tales (released 2009), and nine stories including a novella in Mystery, Mayhem & Magic (released 2017). They are both available in hard copy and on Amazon as ebooks. I also contributed to 'Spooktacular Stories' a Share Your Story anthology launched in October 2019. I blog to showcase my work. My book reviews appear in PIO (Pass It On) and e-Writeabout. I'm a happy Grandmother to two beautiful girls, wife of the ever tolerant Clive, mother of our son Simon and mum in law to Cassie. I lead a busy life.
View all posts by jillsmith →
This entry was posted in Somerset Storyfest and tagged Adaptive World Champion Surfer, australian authors, australian story, blogging, books, film, film of the book, hope and recovery, images, inspiration, journal, kyacking, life stories, lifechanging, love, mental-health, Penguin the magpie, photography. Bookmark the permalink.