I’m delighted to be able to present interview questions by Tony of NF Reads, with me! Here’s the link to this inspiring site.

I have always been a writer. My first memory of writing was stick figure comic as a seven or eight-year-old. Someone who read it said they liked the story. I put together an Interplanetary Zoo which was quite detailed, and the creatures were way out there. One of my sisters said, ‘that can’t be real’. I said, ‘It’s an Inter-planetary zoo, of course, it can. How do we know what exists out there?’ Right there, I can pinpoint being a science fiction fanatic.

Richard Davidson, a seventeen-year-old leaving home. He is abducted and taken to a space station at the other end of the galaxy. There he finds love. He and his new alien cloned partner Davrew return to Earth. Davidson’s family lives anonymously in a small rural community while raising a family. Rakal, a violent alien crash lands on Earth and disrupts their existence. Rakal’s intrusion becomes a blessing when the whole Earth faces a threat from space.

Vashla’s is related to Rakal. She is a sadistic space pirate living on her own planet VaLinta. Rakal has sworn to protect The Davidson’s family and Earth. Gardt Ness is a disgraced space pilot, campaigning to alert authorities on his planet Ghaur, that there is a terrible threat lurking in space, and not to attempt colonisation of other worlds. Orthama is a dead planet with a scientific space station orbiting it. Zorn lived on his mining planet Zamba. He wants to control his cousin Vashla. A chain of events occurs that culminates in a battle between all five worlds.

Fan-tas-tic-al Tales – Thirty-four short stories, novella’s and poems make up this collaborative book written by eight ladies with a theme of magic. My six stories are aimed at eight to twelve-year old’s – My Word, Magical Musical Mervin, Horrible Hilda, The Toothpaste King, The Night Witch, and Goblins in the Grounds. This was released in 2009.

What inspires your creativity? 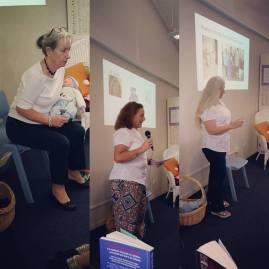 I simply love to write. This year I’ve been entering short story competitions. I had done this about twenty years ago with some success and found that the topics and criteria always made me create something quite new. I like to explore characters viewpoints and reactions in situations where their voice might be something foreign to me but believable to the reader.

How do you deal with creative block?

A. I don’t devote regular time to my writing so I’d have to say I write when I can and have never stopped. If I’m not writing my blog or Facebook posts, I’m reading books to review. The books I’ve written have been done when I’ve dedicated myself to doing them.

Dual Visions started way back when I had a young son. My husband asked what I was doing at the ironing board in the laundry with a notebook and pen. I was writing. I had the idea and I had to put in on paper. When my son was in Primary School, I wrote for

two hours every morning before I had to get ready for work. My more recent books have been written during NaNoWriMo when I dedicate November to writing a first draft novel. All the time, these books have characters that are in my mind. When I come to write the story, I need to fit it all together. Often needing a great deal of editing after the basic work is done. A first draft is very much a work in progress.

What are the biggest mistakes you can make in a book?

A. To think it’s ok without editing, getting it appraised (another person’s take on your story), critiques are invaluable. Then begin the most important work, editing. I’m still learning the craft of honing the basic story into a polished work. I’m better now than I was at the start, but still learning. Never think you know it all, believe in yourself, be persistent and keep going.

Do you have tips on choosing titles?

A. I always start with a working title and in the case of Dual Visions, I found other books with titles like my working title, so I needed something different. It may sound weird, but I woke up in the middle of the night and rushed to write it down. I dreamt the title. Vashla’s World came from the name of the character and the fact that the storyline became a battle for peoples from five different planets to defeat their foe. Short story titles come from the theme or character. I’m never sure if I get it right but it fits with me and that’s the most important thing. Your creation has a unique starting point, even if you don’t arrive at it until you’ve almost completed the first draft. 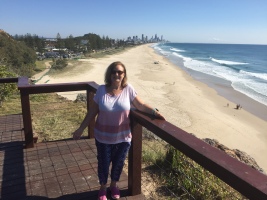 How do bad reviews and negative feedback affect you and how do you deal with them?

A. When I started out, I found it very difficult to swallow that someone couldn’t see what I was writing was a complete story. I’ve since learned that a writer doesn’t always see faults in the work, you’re so close to it you can’t see the mistakes. The writing group I belong to critiques and helps give candid feedback. I love reshaping a story that has shortcomings. Again, I’m no expert and happy to admit, I’m still learning this craft. Sometimes, feedback can be surprising and take the story in a totally new direction. I love that.

How has your creation process improved over time?

A. Well, that’s a good question. I’m sure I’m better at editing. I’ve always been able to come up with ideas and write something, although, I’m my own worst critic. I never think it’s good enough. I don’t feel confident enough to say – that’s it! However, I’d never written for children when I joined The Ten Penners in 2007. Now I love writing children’s stories. My adult stories are romantic, and I may continue to evolve and change directions. That’s the beauty of writing.

What were the best, worst and most surprising things you encountered during the entire process of completing your books?

A. The best thing is joining writing groups. Being part of a group of like-minded people who share your enthusiasm. They are great friends, inspiration and critiques from them are invaluable. The worst thing is having to deal with technology. I’m always battling how to convert something to a file or to get organised. I have Scrivener and really need to learn how to use it to simplify my life. A new computer would be a boon too.

Do you tend towards personal satisfaction or aim to serve your readers? Do you balance the two and how?

A. I love to write and have always written the kind of story I enjoy reading. Science Fiction and Fantasy has always been the start. However, having to stretch and change to suit any competition criteria or theme, has always given me the opportunity to try something new.

What role do emotions play in creativity?

A. If you tap into emotions and make the reader feel them, you have created something 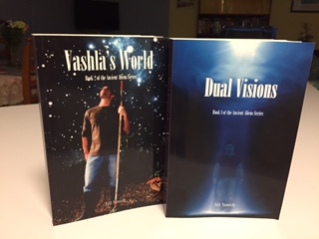 magical. Emotions that feel raw and really enhance any story.

At one point in Dual Visions, I wrote a scene that was very dramatic. I was carried along with what was happening and could honestly say I didn’t know till I reached its climax if the character I’d created who’d become a central figure in the book, would live or die. The result was satisfying when one reader (a co-worker of mine at the time) came to work and said – Jill how could you do that? The emotional feeling, I had while writing that scene, shone through for the reader.

Do you have any creativity tricks?

A. Just write whenever you can, as much as you can. And read, read, read. Go to writer’s festivals, join writing groups (but don’t get hung up on being on the committee), find time to be kind to yourself. Writing is a solitary and often insecure process. I need this advice myself – believe in yourself. Sign yourself as an author and believe it.

What are your plans for future books?

A. I’ve written the third book in the Ancient Alien Series, working title Travellers, that needs editorial work. I’ve also written a Young Adults manuscript, working title Microworld and it’s follow-on Microworld Undersea, both science fiction written during NaNoWriMo. I read YA’s books all the time and find them the best reads. Once these are edited, I’ll be getting it out in the wide world too, more than likely as one volume. I’d love to have a publisher take up my books. I’d also love to be paid for writing books and book reviews. Why should passion a pauper makes?

Tell us some quirky facts about yourself?

My full name is Barbara Jill Smith, but I have always preferred Jill, (DON’T call me Barbara!) I grew up in Victoria in Australia, the colder southern states. I hated getting chilblains (like frostbite) on my fingers, which I did every year in Victoria. When our son was young, I moved north with my family to warmer climes in Queensland, twenty-seven years ago. I have mad hair, that I’ve always tried in vain to tame. There are times it resembles a Witches’ broom. I believe in ‘the glass half full’ view of the world and that humankind will overcome tremendous hurdles to create a wonderful future. Yes, I’m a Trekkie at heart and the future where people strive to be good to the planet and themselves is one, I aspire to. I smiled when going to the doctors for my flu injection the nurse took my temperature with a little white hover on your forehead device. (very Star Trek)

I am an author of SciFi Books 'Dual Visions' and it's follow up 'Vashla's world' now retitled Book 1 and Book 2 of the Ancient Alien Series, as I've written the third in the series currently titled Travellers. I also write book reviews, articles and short stories. As a member of The Ten Penners, I've written six short stories in a collaborative our anthology for children called Fan-tas-tic-al Tales (released 2009), and nine stories including a novella in Mystery, Mayhem & Magic (released 2017). They are both available in hard copy and on Amazon as ebooks. I also contributed to 'Spooktacular Stories' a Share Your Story anthology launched in October 2019. I blog to showcase my work. My book reviews appear in PIO (Pass It On) and e-Writeabout. I'm a happy Grandmother to two beautiful girls, wife of the ever tolerant Clive, mother of our son Simon and mum in law to Cassie. I lead a busy life.
View all posts by jillsmith →
This entry was posted in gold coast writers association, the ten penners and tagged australian author, blog, blogging, books, creative writing, Dual Visions, entertainment, environment, family, fan-tas-tic-al tales, inspiration, interviews, journal, Mayhem & Magic!, mystery, Reviews, science fiction, science fiction novels, Vashla's World, writing, writing craft, Writing for Children, writing tips. Bookmark the permalink.