The Ivory Rose by Belinda Murrell reviewed by Jill Smith

Jemma just started her first babysitting job in one of Sydney’s iconic homes known as the Witches’ Houses. The house is old and run down and Sammy is a fun loving energetic girl. Her mum Maggie, is an artist and single mum, needing Sammy to be occupied for a few hours each afternoon so she can finish her work for an exhibition.

The rambling house is a bit creepy and Sammy’s cat screeches and spits when the air in her room gets cold. Mater of factly Sammy tells Jemma that her friend Georgie is in the room. The chair in the corner of the room begins to rock. At first, Jemma thinks the little girl has an overactive imagination then other strange things happen.

At home her parents are always busy and hardly there for Jemma, so she spends a lot of time at her best friend Ruby’s place. It’s untidy and chaotic but filled with love and laughter. Jemma’s home is a show home of neatness and she feels detached. It’s nearly her birthday and she’s longing to just hang out, having a sleepover, painting their nails and chatting. Her mum has other ideas. 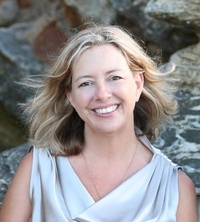 Jemma looks up the history of the Witches Houses of Annandale on her laptop. She finds out a lot about the area and about Rosethorn house. She read that a little girl Georgiana Rose Thornton had been murdered in the house. Was it a coincidence that Sammy called her invisible friend Georgie?

The next Monday Jemma rushed to Sammy’s after school. She found more things had been unpacked. Jemma suggested she and Sammy read and then play hide and seek. She looked for Sammy and found her frightened and hiding in a secret cupboard. Jemma saw a flash of the past when a pin stuck in her hand. Once they were back in Sammy’s room Jemma calmed the little girl down, she put the dainty pendant carved from creamy ivory in the shape of a perfect rose on the dressing table, an ivory rose. But who was Aggie? Why did Sammy think someone was trying to hurt Georgie?

Sammy left to go downstairs and Jemma couldn’t resist putting on the pendant. Shadow the cat spat again and the room was cold. Jemma felt that someone was with her in the room. Someone wanting to hurt her. The history of the Witches’ Houses in Johnston Street linking Rosethorne house from the century before Jemma’s time to her own suddenly became very real.

This is an intriguing time slip story and one with a very satisfying end.

I am an author of SciFi Books 'Dual Visions' and it's follow up 'Vashla's world' now retitled Book 1 and Book 2 of the Ancient Alien Series, as I've written the third in the series currently titled Travellers. I also write book reviews, articles and short stories. As a member of The Ten Penners, I've written six short stories in a collaborative our anthology for children called Fan-tas-tic-al Tales (released 2009), and nine stories including a novella in Mystery, Mayhem & Magic (released 2017). They are both available in hard copy and on Amazon as ebooks. I also contributed to 'Spooktacular Stories' a Share Your Story anthology launched in October 2019, and have another story accepted in the 2020 ‘Tell em your dreaming’ anthology to be released late 2020. I blog to showcase my work. My book reviews appear in PIO (Pass It On) and e-Writeabout. I'm a happy Grandmother to two beautiful girls, wife of the ever tolerant Clive, mother of our son Simon and mum in law to Cassie. I lead a busy life.
View all posts by jillsmith →
This entry was posted in Recommended and tagged australian author, Belinda Murrell, book review, children's stories, childrens books, history, sydney witches houses, theivoryrose, time slip, time slip story, Young adults. Bookmark the permalink.