‘How to Bee’ by Bren MacDibble reviewed by Jill Smith

Title: How to Bee

Peony wants to be a Bee more than anything in the world. She and her sister Mags are very good Pests. It takes a lot to make it through the test to become a Bee and if she did, they would have more food. Peony tries even though she’s too young. Her friend Applejoy has an excellent smile and he does make it through the test the Boz or Forman sets. This time she is tripped up by a mean girl Pomz, so she fails the test. Pomz and AJ are the new Bees.

Gramps makes them good food and gives good hugs. When Ma comes home from the city, all worn out and crying, Gramps feeds her and gets her to sleep. His love rejuvenates his daughter Rosie enough for her to go back to the city. Peony and Mags want Ma to stay. They don’t need the money she brings home with her. They live in a shed on the farm. AJ and his mum and MJ live in a shed nearby. What could be better than the learning over the radio and working on the farm? 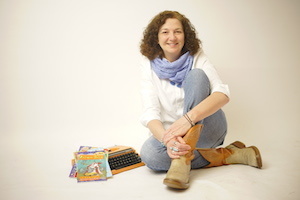 Peony is dragged away to the city and her world is turned upside down. She sees her Ma being bossed around and she doesn’t like the Ape Man who pulls her into the car. She must work and be polite, even though she doesn’t know what that means. She meets Esmeralda and finds out that people can be frightened of going outside. Peony makes a promise, and so does her new friend Ez.

The book is wonderfully written and a world without bees becomes a possible near future reality. It’s no wonder this book won and was shortlisted in so many awards.

I’m sure to re-read it many times.

I am an author of SciFi Books 'Dual Visions' and it's follow up 'Vashla's world' now retitled Book 1 and Book 2 of the Ancient Alien Series, as I've written the third in the series currently titled Travellers. I also write book reviews, articles and short stories. As a member of The Ten Penners, I've written six short stories in a collaborative our anthology for children called Fan-tas-tic-al Tales (released 2009), and nine stories including a novella in Mystery, Mayhem & Magic (released 2017). They are both available in hard copy and on Amazon as ebooks. I also contributed to 'Spooktacular Stories' a Share Your Story anthology launched in October 2019. I blog to showcase my work. My book reviews appear in PIO (Pass It On) and e-Writeabout. I'm a happy Grandmother to two beautiful girls, wife of the ever tolerant Clive, mother of our son Simon and mum in law to Cassie. I lead a busy life.
View all posts by jillsmith →
This entry was posted in Uncategorized. Bookmark the permalink.